Rosa Pugliese, CED English to Spanish translator, has been working in the translation industry since 2000. During this time, she has become proficient in interpreting the original text and pouring it into the Spanish language while maintaining each author's style and message.

As a Spanish native who has lived in various cities of the United States, Rosa has come in close contact with a wide variety of Hispanic cultures. This has shaped her world view and helped her connect with individuals with different idiomatic expressions. She comments, "I like to work very close with my clients to be sure they get the type of translation they are looking for. Even though Spanish is spoken in many places around the world, each region has its own words and meanings, so I make sure the Spanish I write is one that is universally understood."

Years ago Rosa felt God leading her to get involved in translation work to help spread the Word and to be an instrument in making the resources that are widely available in English available to Spanish-speaking people here in the United States and throughout Latin America and Spain. Rosa has translated/edited more than 100 titles for various publishers, including books written by Gary Chapman, Tony Evans, Bill Perkins, Gary Smalley, Randy Newman, and others.

For twenty years, Rosa has been serving the Lord alongside her husband in pastoral and teaching ministries. 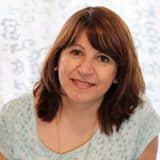